For 22 years, Senior Chief Engineer Chuck Cart has been tethered to the S.S. Badger 24 hours a day, 7 days a week, 365 days a year. And he wouldn’t have it any other way. 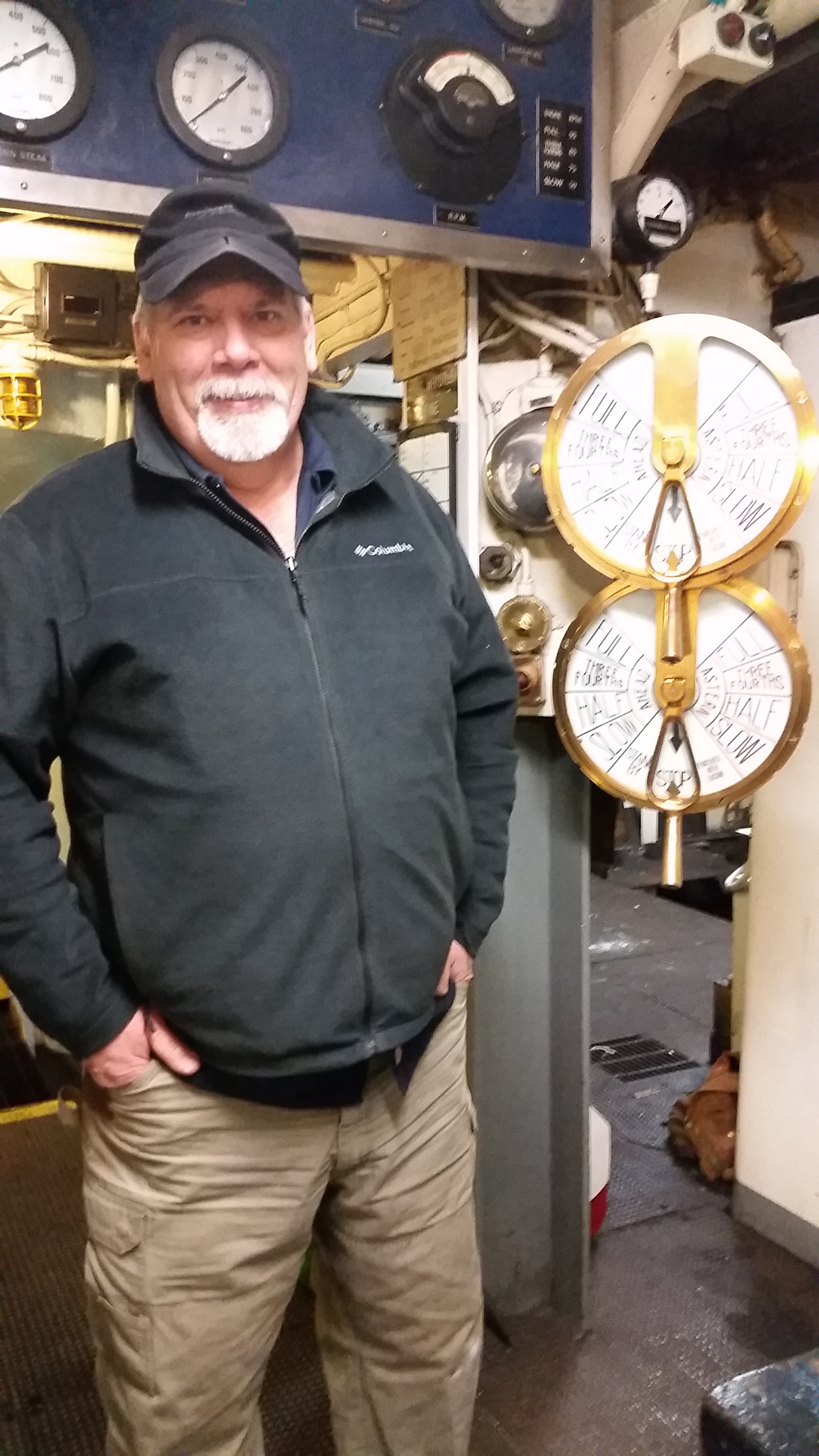 “I used to be gone a few months on a ship, sometimes as long as nine,” recalls Cart about his early years working on Great Lakes ships hauling iron ore and limestone, and ocean-going tankers transporting fuel for the U.S. Navy during the Gulf War. “I get to leave the Badger after a four-day work week, but I’m always on call.”

Born in Texas and raised in South Carolina, Cart got his marine engineering degree at Great Lakes Maritime Academy in Traverse City. He was on the Great Lakes for Bethlehem Steel Corporation when he got a call from the merchant marine officer union about a temporary position on the S.S. Badger, a union ship.

“I came here as medical relief for six months, and at the end of the season, they asked if I would stay.”

The rest is history.

How is being an engineer on the Badger different from past jobs? 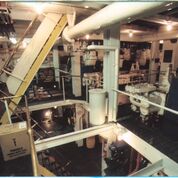 This is my first job as a chief engineer. And while I had been sailing for 10 years, this is my first passenger ship. Also, this is a one-ship fleet. The smallest I’d worked on was three ships, and the biggest was 30-40 ships. But that’s what makes this fun. I get to be more involved than if I worked for a bigger fleet. I make more decisions because not only am I the chief engineer, but I also do the work of a fleet engineer. But the biggest difference is that I’ve been on call 24 hours a day, 7 days a week, 365 days a year for 22 years. If I leave for training or vacation, they know where I am and how to reach me, and there is a plan to get back.

What happens in the Engine Room? 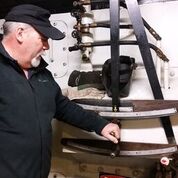 We are responsible for operating and maintaining all equipment on the ship except the radio and radar. If there’s a machinery issue, we need to get proper parts and repair it without impacting the crossing schedule. If we’re doing everything right, the passenger shouldn’t know we’re here.

How does the ship operate?

The Badger is an old-style ship, and the captain doesn’t physically control it like on newer ships. We use engine order telegraphs. The captain rings a bell when he needs us to do something, and then he telegraphs what he needs – slow down, open the throttle, etc. We control the engine accordingly. The ship is like an orchestra, with the captain as the conductor and the Deck and Engine crews playing the instruments. (Our documentary shows the telegraph process at 6:00-6:32 and 8:14-8:44.)

What’s in the Engine Room and how is it staffed? 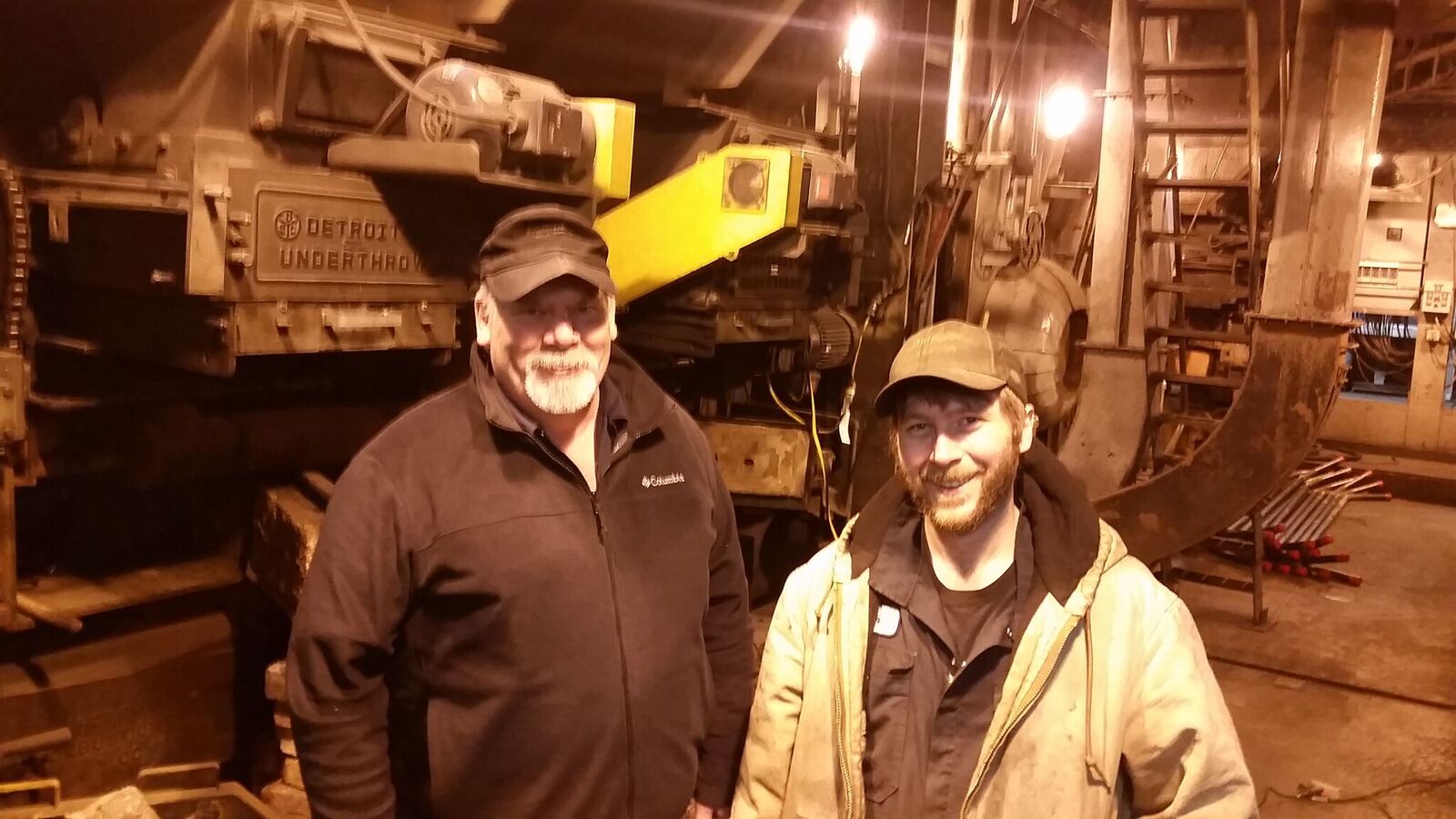 There are two main engines, four boilers, and a coalbunker holding 500 tons of coal, plus other machinery. We operate on the traditional maritime “three-watch” schedule with five people in the Engine Room at a time – a watch engineer, water tender, fireman, coal passer and me. Three additional people work – two junior engineers and a storekeeper. Three watch teams rotate every four hours around the clock during the entire sailing season.

Talk about your crew.

We employ 20 people in the Engine Room – we’re the largest part of the ship’s crew. Most have been here a long time – our relief chief engineer started right after me, and our first assistant engineer has been here 18 years. And many crewmembers have worked their way up from entry-level jobs like coal passers, dishwashers, auto attendants and such.  I have a great bunch of people who are good at their jobs and get along with each other.

Did you develop the new coal ash retention system?

Yes - that was our team. We took a bulk product conveyor system never used on a ship and modified it to haul ash. It was a huge but fun challenge, and not many chief engineers have that level of input. Not only did I get to work with the vendors to help design the system, but I went to Washington, D.C. to meet with the EPA. We also did a combustion control upgrade to reduce the amount of coal burned and ash generated by burning the coal more efficiently, and we’ve seen a 25 percent reduction in ash output. I’m happy with what we did – it was a big accomplishment.

How do you get parts for the ship, considering it was built in 1952?

Some parts we can order, some we make ourselves. For others, we shop at the “Spartan store” – our nickname for the S.S. Spartan, the Badger’s sister ship, which stopped running in 1979. It’s our best parts warehouse!

What would people be most surprised to learn about the Badger?

The ship never shuts down during the season. Once we fire up the boilers in May, it runs around the clock until October. It takes several hours to bring it online, and there wouldn’t be time to shut it off and get it running for the next crossing. And because the boilers are always running, we always need people here. The entire navigational crew (Deck and Engine departments) stays on the Badger throughout the season – each person is provided a private room in the crew-berthing areas plus meals, laundry facilities, Wi-Fi and other comforts.

What is the best part of your job?

I get to do things I wouldn’t do elsewhere, and I can make my own schedule. When all my kids were home, I could go to games, recitals and scouting events. When you look at jobs across the country, this is a really good job. It’s very steady and dependable. It’s a good company to work for, and it takes care of its people.  Plus, I like ships, and the Badger is a great ship. (Learn more about employment opportunities here, including a list of current openings.)