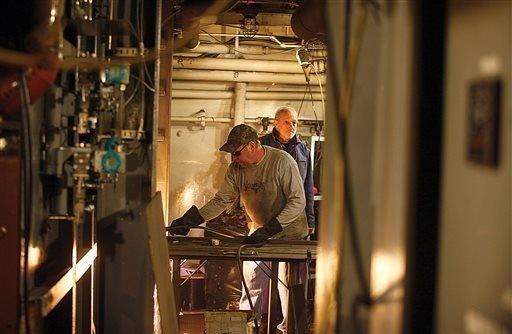 LUDINGTON, Mich. — When the SS Badger sets sail May 16, the venerable and historic carferry will sport new combustion controls that will enable it to burn coal more efficiently. That should result in less coal being burned and less ash being produced by the Badger.

The more than $1 million upgrade represents the most difficult portion of a two-year process for the last coal-burning, steam-fired vessel in the U.S. as Lake Michigan Carferry works to stop the Badger's coal ash discharge into Lake Michigan, according to the Ludington Daily News (Story Here). The 410-foot Badger, operated between Ludington, Michigan and Manitowoc, Wisconsin by Lake Michigan Carferry, will run this season under the terms of a consent decree between LMC and the Environmental Protection Agency and the U.S. Department of Justice that requires the Badger to reduce its coal ash discharge this season and end it before starting the 2015 season.

According to Bob Manglitz, LMC president and CEO, LMC will learn this season if the work done while docked for the winter in Ludington will result in what LMC estimates to be a 10 percent to 15 percent improvement in efficiency, and thus a similar reduction in coal burned and coal ash produced.

That kind of reduction would meet the consent decree requirements for this year, Manglitz said. There could be a payback in fuel savings for LMC, too, he said.

Over the winter, contractors and Badger crew have been installing the digital combustion controls on a vessel that began service in 1953 that to date had been controlled by mechanical technology. Soon LMC will know how well the new controls perform, and how much the system improves efficiency and reduces coal ash. Manglitz said the company should have a good idea of the reductions in coal burned and coal ash early in the 2014 season scheduled for May 16 through Oct. 26. Once those amounts are determined, then the coal retention system can be designed to handle expected coal ash. The retention system would be installed next winter.

The Badger's combustion control work "was a much bigger project than we thought," Manglitz said.

Chuck Cart, senior chief engineer of the Badger, has spent much time keeping the Badger operating and designed the system being installed.

The Badger, Cart said, originally did have a coal combustion control system when built, but it was no longer usable. Mechanical controls and a lot of operator experience have been the primary ways the crew has tried to burn coal as efficiently and cleanly as possible.

In one sense the process is simple. Air is mixed with the coal and burned to provide fire to heat the boilers to power the Skinner Unaflow engines, which turn the props to move the Badger.

The monitoring process will become a digital one with sensors and relay switches sending signals to operators who still will control the system. It's not automated, Cart said, noting that's almost impossible to imagine. The new digital system will provide quicker, more accurate data that in turn will result in quicker and more accurate adjustments.

Some 12,000 feet of wire — about 2 miles worth Manglitz marveled — have been installed on board over winter. The wire connects the sensors, controls, switches, stokers, fans and other assorted pieces of equipment so they can interact with each other. The Badger's four boilers — each with two stokers of their own — provide the heat to make the steam to power its two engines.

The stokers, made by Detroit Stokers for LMC, are fitted into the boilers on new front plates made by the LMC crew from raw steel plate three-quarters of an inch thick. Coal and air mix as they enter the boiler oven for combustion. That air is called distribution air, one of three types of air used in the combustion process. The second air, "combustion air," comes in from below the grated area the coal burns on. The third air, "overfire air," is introduced through nozzles in each boiler to enrich the flame and help combustion. In addition to being part of the combustion process, the distribution air cools the stokers.

The new system, Cart said, changes the mix of air to reflect newer thinking on how coal burns best. More air will be mixed in from the overfire supply, and less from beneath.

Signals from the sensors will provide information to panels so operators can more quickly and accurately adjust the process. New, more powerful fans have been installed to deliver the needed air. Those fans will be controlled by a variable frequency drive — kind of a Star Trekky name for a device that replaces old mechanical controls of switches and valves that have been removed from the Badger.

"This will get more efficient coal burning, less smoke and less ash," Cart said of the changes.

"To control the process, you have to know what the process is doing," he said of the purpose of all the technology. "This just makes sure it burns cleaner."

Also being monitored will be steam demand, steam flow and steam pressure.

Cart said the changes help the Badger be proactive and less reactive on the amount of fuel that needs to be burned at any given time, depending on steam demands.

But it wasn't as simple as downloading an app to a smartphone. Or as comfortable.

Cart and some crew worked in the Badger all winter. Even with furnaces running, he said it was cold, some days never warmer than 34 degrees below deck.

In addition to the control work, the refractory bricks in the Badger's boilers were removed and reinstalled to accommodate more air nozzles in the boilers.

This past week, electricians were busy at work beneath decks on the project.

"A lot of this has gone on concurrently," Cart said. "It was pretty crowded."

In addition, the crew had to do normal winter maintenance. Cart said that wasn't too bad this year since the previous winter the engines had a lot of maintenance done on them.

In all, Chuck Leonard, LMC vice president of navigation, said the entire process took "a considerable amount of work. That was a significant undertaking."

Like Manglitz, Leonard believes this is the bigger portion of the two-step process to retain coal ash.

"We've bitten off the bigger piece this year," he said, adding he's very optimistic the work will deliver the efficiencies being sought.