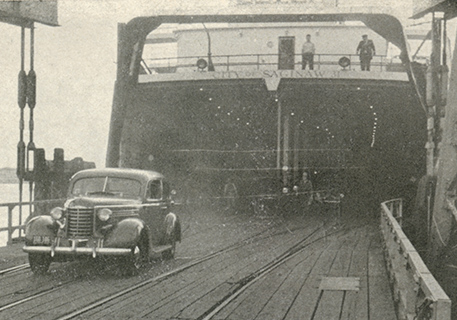 The S.S. Badger is the last coal-fired passenger steamship in operation in the United States. She has provided a fun, reliable and affordable shortcut across beautiful Lake Michigan for more than 70 years and has transported millions of passengers since her re-birth in 1992. In 2016 she received the nation’s highest historic honor when the Department of Interior officially designated the Badger as a National Historic Landmark.

Additionally, the Badger is extremely unique in that she is an NHL that moves. The 410ft. S.S. BADGER can accommodate 600 passengers and 180 vehicles, including; RVs, motorcycles, motor coaches, and commercial trucks during her sailing season. Originally designed primarily to transport railroad cars, this grand ship and the people who serve her have successfully adapted to the changing world since she first entered service in 1953.

Her unique and bold character takes you back to a period of time when things were simpler—offering valuable time to slow down, relax…and reconnect with those you love. She is the continuation of a unique and vital maritime tradition, and we celebrate that heritage on board in fun ways that educate, and entertain. Her mission has changed from the days of carrying railroad cars 365 days a year, and the Badger’s role in the hearts of the areas she serves has not.

A trip aboard the S.S. Badger offers passengers fun & treasured memories. Professional travelers have shared their experiences aboard the Badger with the world and this grand ship has received great praise. The Badger was awarded in 2015 & 2016 a Certificate of Excellence from TripAdvisor and has a five star rating with Travelocity!

The Badger experience allows a rare opportunity to explore a little history—and a lot of fun—by taking a step back into the past on a journey that’s as important as the destination!

From mid-May to mid-October the Badger sails daily between Manitowoc, WI and Ludington, MI Located about an hour from Milwaukee, WI and Muskegon, MI.

In 1875, two years after the city of Ludington was incorporated, the Flint & Pere Marquette Railroad began cross-lake steamer service between Ludington and Sheboygan, Wisconsin to transport goods across Lake Michigan. The first small ships were wooden-hulled and were called “breakbulk” freighters because cargo was unloaded from rail cars by dockworkers onto the ship and then transferred back onto rail cars at the end of the journey. Milwaukee replaced Sheboygan as the primary Wisconsin port in 1876. 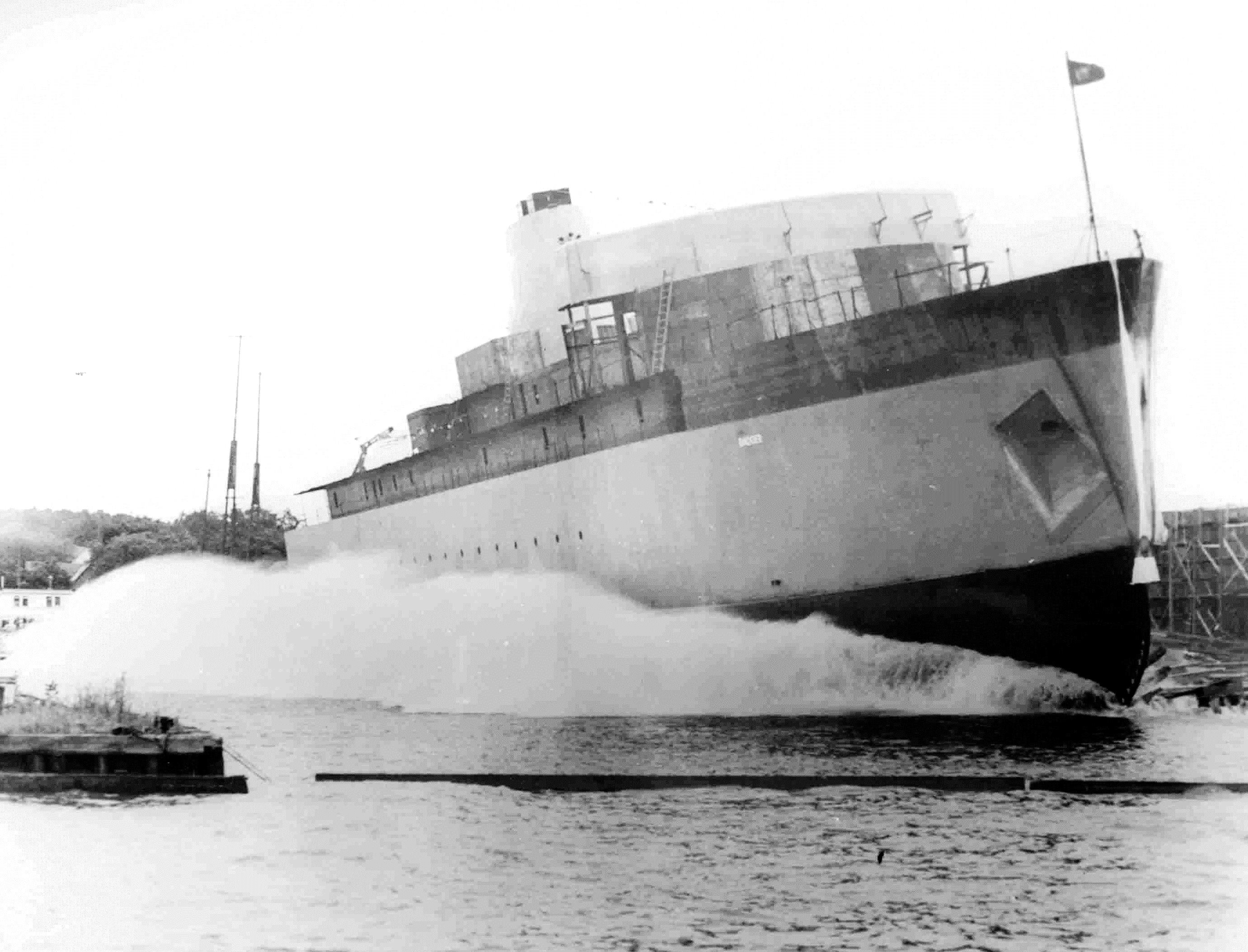 The first Ludington car ferry, the steel-hulled Pere Marquette, was added to the Flint & Pere Marquette fleet in 1897. Along with limited passenger accommodations, she boasted four sets of railroad tracks on her deck, allowing loaded rail cars to be shipped across the lake. This eliminated hand loading and unloading of the earlier wooden-hulled freighters and helped coin the term “car ferry.”

In 1900, the F & PM merged with other rail lines to form what would become the Pere Marquette Railway Company. The new company operated cross-lake car ferry routes successfully for the first half of the century, which led to the construction of ten new vessels. 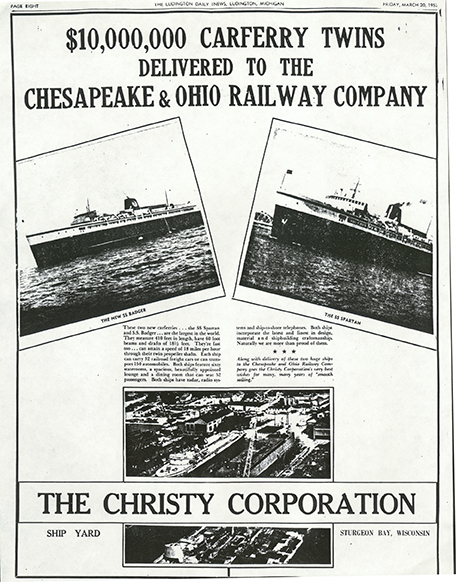 In 1947, the giant Chesapeake & Ohio Railroad absorbed the Pere Marquette Railway, and the service continued to expand for several more years. During the height of the car ferry era in the 1950s, seven ships sailed in and out of the Ludington harbor year-round, transporting rail freight and passengers across Lake Michigan to the Wisconsin ports of Manitowoc, Milwaukee and Kewaunee.

The 410’ sister ships, S.S. Spartan and S.S. Badger, launched in 1952 and 1953, were the last—and largest—coal-fired, steam engine car ferries built in the United States.

As the efficiency of railroad service around Lake Michigan improved, the C&O found it was no longer profitable to transport rail cars by ship. The company was granted permission by the Interstate Commerce Commission to abandon cross-lake routes beginning in 1980. The fleet’s three remaining ferries—City of Midland, Spartan, and Badger—were sold to two Ludington businessmen. Their private venture, the Michigan-Wisconsin Transportation Company, continued to focus on rail freight, but the steady decline in business forced the company to cease operations in November 1990. Railroad car ferries were no longer viable, and the three ships seemed destined for the scrap yard. 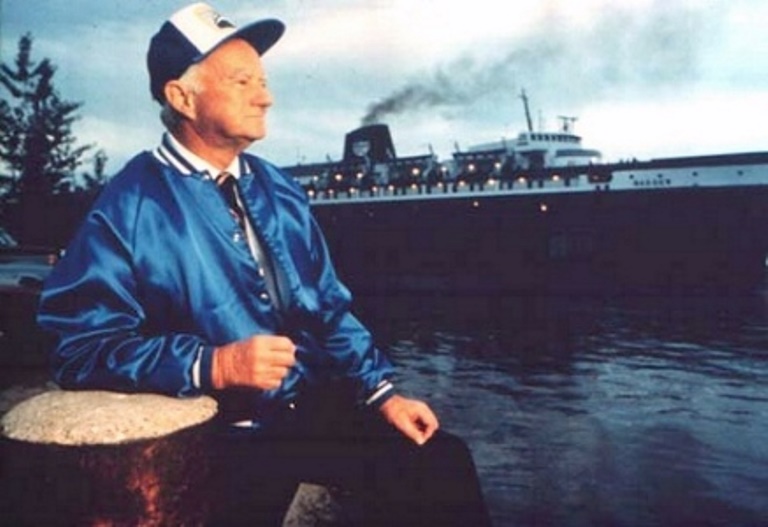 In 1992, Charles Conrad — a Ludington native and retired entrepreneur — purchased the City of Midland, Spartan, and Badger and formed Lake Michigan Carferry Service. Conrad knew how important the car ferries were to the local economy, and he wanted to see them sail for another hundred years. He invested his own money to create a new life for the S.S. Badger, transporting leisure travelers, their vehicles, and commercial trucks between Ludington and Manitowoc. Having proven that the Badger could be resurrected with a new mission, Conrad sold the company in 1994 to Bob Manglitz, Jim Anderson and Don Clingan to carry on the tradition of car ferries on Lake Michigan.